Syria continues to be a hot topic as the civil war continues to intensify. Over the past three years as stories about this crisis continued to be covered by news reports, my thoughts always ran back to the people I met in 2010.  This started in October of 2011 when the Syrian military began bombing Homs. With each report I thought about my driver. Even though he lived in Damascus, most of his family still lived in Homs. Then in July of 2012 the Syrian army began bombing the ancient city of Aleppo. I worried about what must have happened to all the shop owners  I met inside the souk when I read that it had been destroyed by bombs. Now as the war moves into Damascus I remember the friendly street vendors and the warm welcomed hugs from women at the Umayyad Mosque.

In 2010 very few tourist were putting Syria on their places to visit. A few European tourist were enjoying cheap flights into Damascus for a long weekend of shopping in the bazaar, but few came to see the 6 Syrian UNESCO sites. When people think of tourism in the Middle East, they think about Egypt, Jordan and Israel, but not Syria. At that time it really was the best kept secret in the Middle East.

When I planned my trip I had friends ask how I could be brave enough to journey to Syria without knowing anyone who had gone before. My reply was simple, I knew about Arab hospitality. Ahmad Azban, author of Dianwan Baladna, Arab Culture from the Arab Perspective puts it this way, “To the Arabs, extending good hospitality is more than just an admirable thing to do–it is a matter of honor and also a sacred duty.” With this knowledge I talked a close friend into coming along.  We both think of it as one of those lucky decisions that one makes not knowing how precisions it will be one day.

Everywhere we went we were given a warm welcome from both the women and men. Not once did we receive an angry slur or a feeling that we were not welcomed. In fact, it was often difficult to find the opportunity to end a conversation. To help you understand the Syria I experienced in 2010 I have added images of the people I met and the story that went with each.

The People of Syria:

This very kind man was our driver for 12 days. He always made sure we were safe by telling us areas to avoid.  His little girl called him everyday on the phone. We quickly learned the ring tone of her calls.

The city of Aleppo is one of the most fascinating places I have ever visited. Before the war is was one of the last walled cities in the Middle East with a medieval souk. Deliveries were still done by donkey. One morning after taking pictures I was returning to my hotel for breakfast. While passing through the ancient souk I stopped to  take a picture of this man preparing for his daily customers. He ran a small restaurant that seated no more than 10 people.  With the click of the shutter he looked up surprised to see a Western woman standing beside him. He then insisted that I sit down. Not speaking a single word of English, he pulled out a stool and motioned for me to sit. How could I refuse?

Once seated, he directed one of his sons to make me some tea. The aroma was wonderful with the smell of  cinnamon boiling in the water. Using my phrase book and the little English his sons spoke, we had a very lovely time together having tea and watching the local shops open for the day.

You can’t seem to avoid them, there is always a”used car salesman or snake charmer” on every street corner, or in this case, every souk. This man tried his very best to charm us into buying something in his store for an outragous price. He even tried a marriage proposal to get us to buy.

Then if charm doesn’t work, give humor a try as the this man did with his sign. Shopping in Syria was always fun.

T. E. Lawrence (Lawrence of Arabia), Agatha Christie and Charles Lindbergh once roamed the streets of  Aleppo for good reason. The Eastern extension of the Orient Express used to end in Aleppo making it a popular city for both traders and opulent travelers. This explains why Agatha Christie wrote the first chapter of her book Murder on the Orient Express while staying at the Baron Hotel in Aleppo.  I’m sure one of the delights they enjoyed was the delicious Aleppo cuisine; a mixture of Turkish, Jewish and Armenian food. If you have a sweet tooth, there are many tasty pastry shops to satisfy your appetite.

But I will never forget the evening meal we had in the Al-Jdeida section of Aleppo. Up on a rooftop overlooking the Saahat-al-Hatab square we watched the evening turn into night while we enjoyed cherry kebabs, Muhamarra dip and the whirling dervish dancers.

One day after touring the Marquab Castle we stopped for a bite to eat at a lovely outdoor restaurant with grapevines shading us from the hot summer sun.  While there one of the locals came over to say hello to our driver. He was immediately smitten with my friend. Once we finished with our lunch he insisted that we visit his garden where he pulled up some radishes to give us. My friend also got a lovely bouquet of flowers from his garden. We both wonder what his wife thought of this?

Near Saladin’s Castle, known for battles during the crusades, we decided to enjoy a roadside stop for our lunch. This mother and daughter were busy making various Syrian meat and vegetable pies. 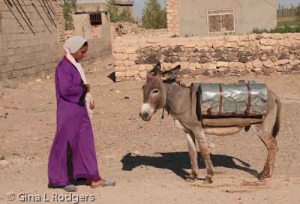 Near the ancient ruins of Rasafa we met delightful people who still use donkeys as their main means for transporting daily water supplies.

We visited Syria in the middle of the summer. A little crazy, but the only time I could fit the trip into my schedule. I found the desert to be tolerable since there was usually a gentle breeze or the shade of a tree to rest under, but neither of these were available in the large city of Damascus. We found the coolest place to go was the Umayyad Mosque. We went there on more than one occasion. Sometimes to just sit in the shaded arched arcade and watch the children play in the courtyard. This incredible structure dates back 3000 years to the 9th century BC serving as a place of worship for many. In the beginning it was a worship place for the god Hadad, the Romans then turned it into a temple to the god Jupiter, but later made it a church when Constantine embraced Christianity. There have even been claims that the head of John the Baptist rests in a casket inside the mosque. When Muslims entered Damascus in 636 AD they allowed Christians to continue to worship on the western side while they worshipped on the eastern side. This arrangement lasted for 70 years.  On our visits we were always embraced by the women and children curious to know who we were.

The old city of Damascus is full of tiny side streets. Parts of the old city are Christian while other areas are Muslim. Up and down the street you can find shops of all kinds selling paintings, copper pots as shiny as a new penny,  or even a shoe cobbler. I couldn’t resist buying three pairs of handmade leather sandals from this man. Because of the intense heat in Damascus my face was covered with many small red bumps. He was deeply worried about me and asked if he could put some olive oil on my skin to help.

One morning we arose early to check out the streets of Damascus before it became too hot and noisy with braying donkeys and honking vehicles.  While wandering up and down small streets we saw this man inside his home busy at work. He was making candy to sell to the local vendors in the souk. With two big smiles on our faces and a few hand motions we were invited inside. Little conversation took place, but sometimes words are not needed. I still have the small bag of candy he gave me in my freezer. Some keepsakes are too precious to ever eat. 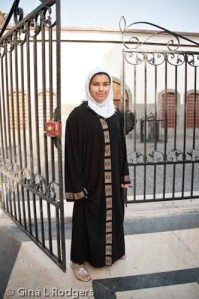 On one of our visits to the Umayyad Mosque we met this sweet young woman as she was entering through the gate. She was shy but allowed us to snap a few pictures of her. We later saw her again with her parents near the Roman arch in Damascus. We smiled and waved, then she approached me. She took off the necklace from around her neck and gave it to me. I was too touched to know what to say. Thankfully I was wearing the endless knot charm that I had bought in Ethiopia and offered it to her. To this day I wear her necklace and wonder what her life is like today. This happens when you travel, you meet wonderful people for brief moments, yet you connect in the most human way possible.

I cherish the time I spent in Syria and the people I met. They blessed me with their hospitality and kindness. Today I wish each of them peace and a quick end to the suffering of their homeland.

To see more images from my 2010 trip to Syria: http://ginalrodgers.com/images/syria/index.html