Getting Around Provence on 2 Wheels

For years I have longed to see the lavender fields of Provence. When I discovered that the lavender usually blooms in early July, I thought a bicycle trip seemed like the perfect way to go. Even though the lavender was almost finished when we arrived, the trip was still quite romantic and charming.

During the trip I shared our daily adventures with family and friends by email.  Below are the emails I sent out during our 6 day bike ride through Provence.

Our first day was very enjoyable in spite of the 20 mph head or side wind that we had to deal with ALL DAY. Once we were coming down a hill and it felt like we were barely moving! At the end of the day we rode pass many lavender fields. The air smelled like lavender for miles. The hardest part today was getting use to using a touring bike. It is a bit like being on a tight rope with wheels. All I have to do is adjust my hands on the handlebars, and I there I go wobbling back and forth. 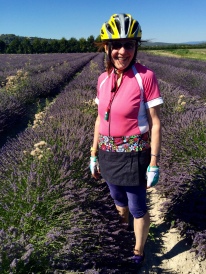 We were happy to leave our hotel this morning with no wind, but by 2:00 in the afternoon the temperature was close to 90 giving us a new challenge. We also passed by more lavender fields and stopped to watch some being harvested.

Since it was Sunday there were many bicyclist on the road. Before 11:00am we had seen more bikes on the road than cars. We are guessing we saw over 250 bikers, but only about 10% were women. When I thought I couldn’t ride any further because of the heat, we came into a small village and stopped for some cold drinks. We found a bike shop where Jim got me some new bike shorts hoping they would help with my very hard bike seat. (Answer: a little.) While in the shop Jim saw bikes that cost over 6000 euros (around $6700.) But bicycling is King in Provence. The Tour De France comes through here each year. We saw more than one serious rider yelling at vehicle drivers if they thought they came too close. Believe me, I’m passed frequently as if I’m standing still by these avid bicyclist. On our last hill of the day we learned that the Tour De France racers had followed the same route just 3 days earlier.

We both started out happy this morning knowing that we would be doing 10 less miles than the 2 previous days, but that enthusiasm was quickly dissolved by all the hills on the route. I have no idea of the elevation that went up and down, but it was significant enough to fatigue my legs by 2:00pm. On the last big hill I was forced to walk my bike up the last quarter mile. If it hadn’t been for the 90+ temp. I might have made it. Jim hung in there, but was sweating profusely once he reached the top. Everything that goes up must come down. Not sure of my speed but I’m sure we reached 35 mph on many downhills. Along the route we saw the mountain called Mt. Ventoux that is always included on the Tour De France. Wisely we chose to avoid this.

Provence is very lovely. Each little village we ride through is just plain cute. Then the vineyards, miles and miles of grapes. I’m sure we have passed 100’s of wineries by now. On this touring bike I didn’t trust myself to stop for a wine tasting.

Another great day. We are both exhausted but loving the trip. 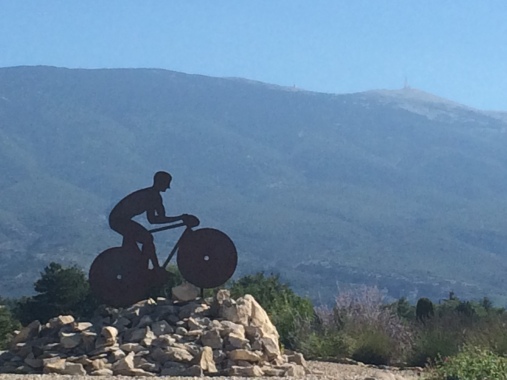 After 2 days in Mazan we rode to a lovely hillside village called Gordes. We started as early as possible hoping to get to our destination before the hottest part of the day. We continued to ride past many vineyards and a few sunflower fields. We had one hard climb in the morning but the best was saved for last. The last hour was a very long and hot steady climb. The temp. took its toll on my energy making the climb take twice as long.  But no worries, once we arrived in lovely Gordes we treated ourselves to 2 scoops of lavender gelato. Not a bad way to end a day.

After our French breakfast on the terrace of our hotel we were off to St. Remy. This was our first day without hills to climb. Can we all shout at once “Yippee!” My body was thanking me the whole day. We made one long stop at the lavender museum along the way and learned a great deal about types of lavender and how the oil is extracted from the flower. I was surprised to learn that lavender oil isn’t just for perfume, but has many medicinal purposes.
Once we arrived in St Remy our 1st stop was the Saint Paul Asylum where Vincent Van Gogh lived for a year recovering from his mental condition. It is where he painted some of his most famous pictures such as Starry Night, Iris, and Sunflowers. The asylum is still used today but the area where Van Gogh lived is kept as a museum. A visitor can easily visualize where he got his inspirations. 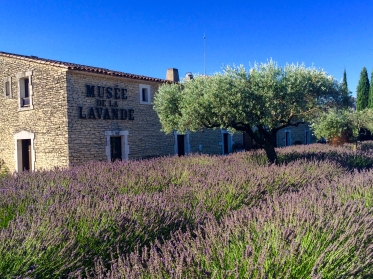 We finished our ride around 1:00pm. It was a fun and easy day even though we got a little lost the last hour. Both of us have very sore bums, but other than that we are feeling great. I even grew to really like my high speed touring bike which was far from true on the 1st day.

I’m happy to say that we did survive our 6 day journey with only a few bumps and scratches. Along the way I learned to pay close attention to those tiny stop lights the size of 2 coke cans. On the first day I ignored one and had a wreck that sent me over my handlebars. Check out the video to get a small taste of our adventure.